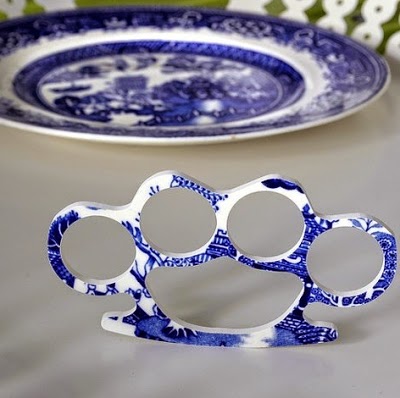 A Steampunk Guide to Tea Dueling has been BANNED IN BRITAIN! The British Steampunk Community (the Facebook group, not the whole island) and the Honorable (used very loosely) Association of Tea Duelists are irate that an upstart American is the tea dueling world champion and has turned their civilized (read: boring) pastime on its ear!

The old rules were absurdly confounding, or one could venture so far as to say confoundingly absurd, so we took the Tiffin Tosser and the rest of the poorly worded tripe and got rid of it! Now the game is fun and exciting! 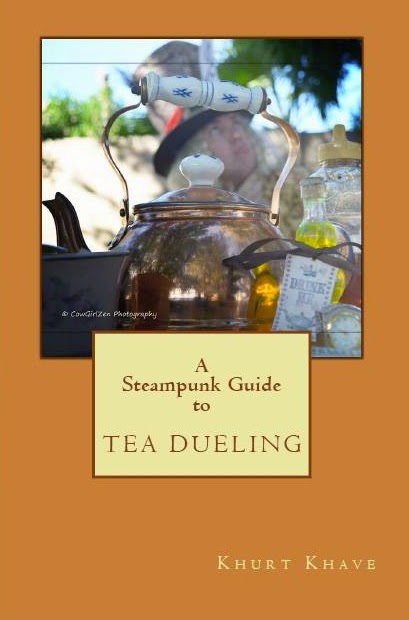 A Steampunk Guide to Tea Dueling will teach you how to play in a clear, precise manner as well as including 40 alternative and additional rules to add variety and even more amusement. There are also over 30 tips, tricks, and pro techniques to insure your victory, whether in the free-for-all tea gang fight scenario of Last Man Nomming or a one-on-one duel on the field of tea. The tea dueling champion of Phoenix Comicon 2014 used the pointers in this book to secure his triumph with these ironclad techniques. 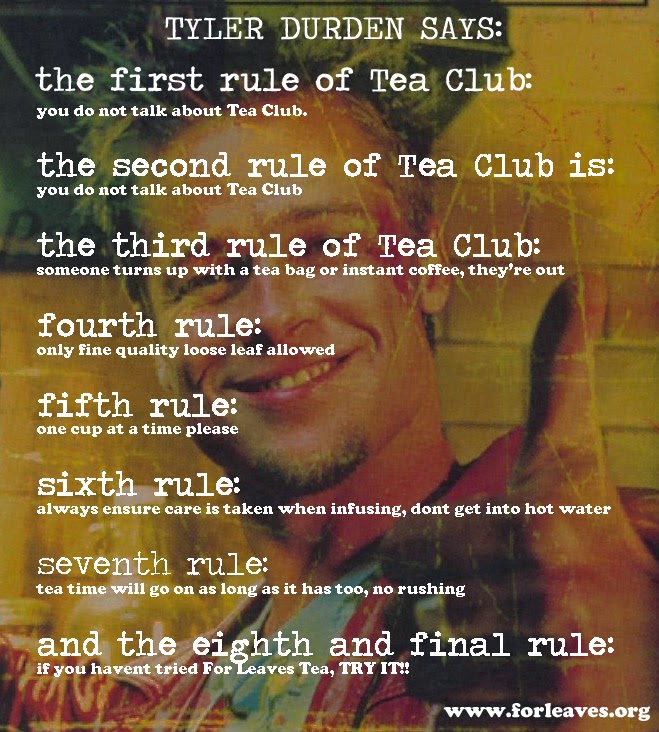 “It was on the tip of everyone's tongue, Tyler and I just gave it a name.”

A multitude of food competitions having evolved through the years, many stemming from the county fairs of the 19th century (well what do you know, more era appropriate steampunk activities in which to partake for the pompous among you who thrive on nothing but period accuracy—lighten up, trug nuggets). Baking competitions, pie eating contests, and bobbing for apples now joins the modern day pastimes of speed eating, televised cake decorating, the Tim Tam Slam, Oreo dunking, and even tea dueling.

So anyone who says they invented tea dueling is a right ruddy bludget. And for any loyals to the Crown who may still be harboring disdain, Statute FL-108 of the Copyright Law of the United States of America states thusly, “Copyright does not protect the idea for a game, its name or title, or the method or methods for playing it. Nor does copyright protect any idea, system, method, device, or trademark material involved in developing another game based on similar principles.” Don't let any British brasser tell you how to take your tea. 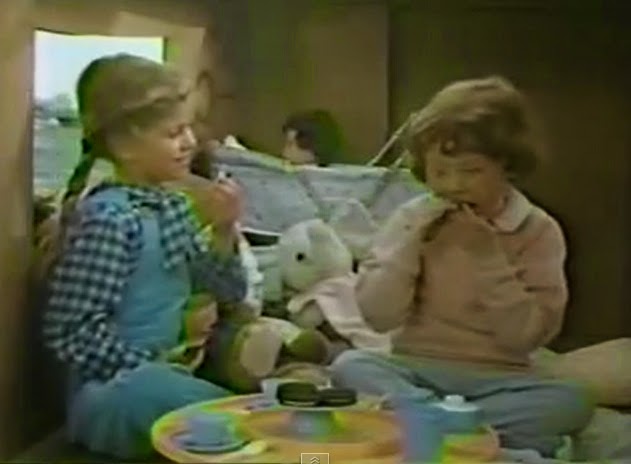 Oreos at the tea party – tea dueling since the 80's 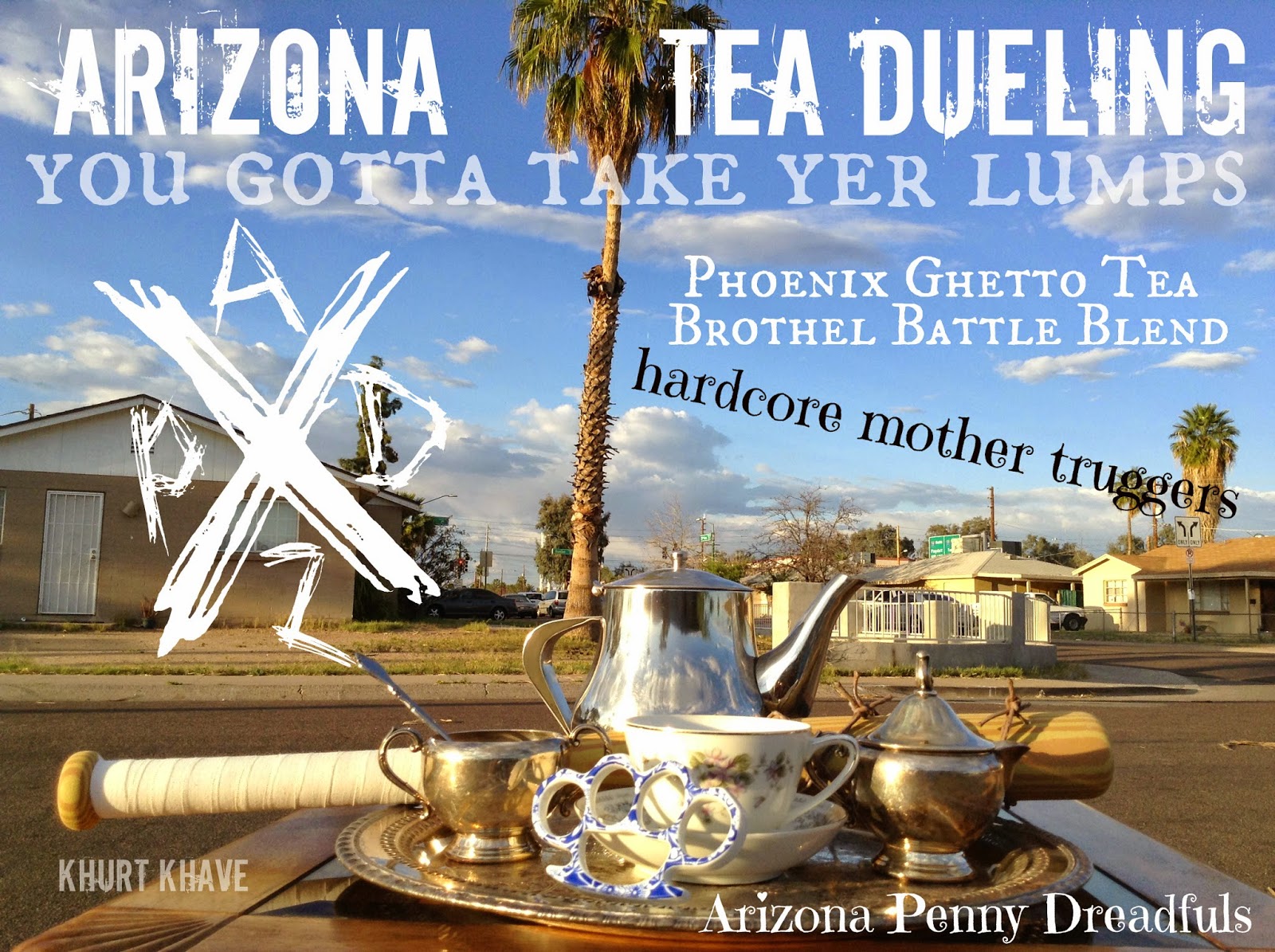 We do things a little bit differently in Arizona steampunk. And the Welsh tea dueling rules? Uff da! Those are right out, unless you like doing accounting homework during tea! What a bunch of dollymop lollipops, I tell ya.


I have hosted tea dueling events numbering upwards of 150 people. We do not have leisurely, politesse duels, ours are theatrical, electrifying rounds of berzerker dunking! It is not a spectator sport, it is a combat sport! We involve as many of the audience as possible in the time allotted and the splodges really fly when the biscuit battles are going full tilt. If you're bored we'll deliver your last rites – because you're dead!


If you're in Phoenix, hit me up, Khurt Khave, on Facebook. The Arizona Penny Dreadfuls want you for tea dueling!
Posted by Khurt Khave at 6:16 PM