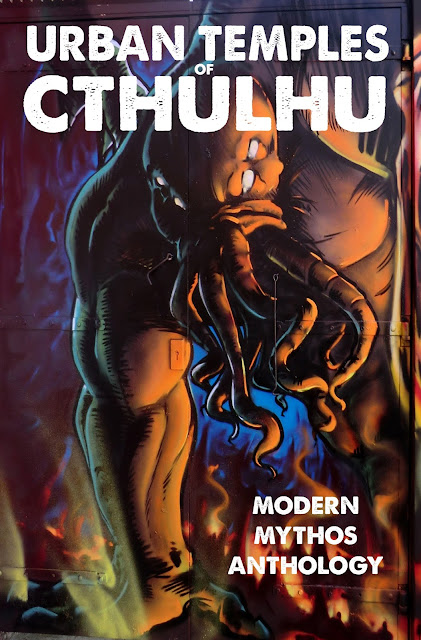 URBAN TEMPLES OF CTHULHU – MODERN MYTHOS ANTHOLOGY
published by the
First United Church of Cthulhu
Lovecraft for the 21st century.  We are the future of the Mythos.

In the dark recesses of the world's cities lie the hidden altars and secret cathedrals dedicated to the blasphemous beings from out of space and time. And they want in!


“Little Gods” by James Pratt
“Sects and the Single Girl” by Steven A. Roman
“The Kings in Rebel Yellow” by Khurt Khave
“The Face of God Within” by Brian H. Seitzman
“The Black Metal of Derek Zann” by Aaron Besson
“Cosmic Cavity; or, the Mouth of Man” by Carl R. Jennings
“Along the Shore of Old Ridge” by Stuart Conover
“Sleep Talking” by Jeff C. Stevenson
“Matriarch of Skid Row” by M. C. Bluhm
“Uncle Lovecraft: The Complete Oral History” by David Acord
“Strange Communion” by Allen Griffin
“Death in the Sunset” by Guy Riessen
“The Abomination of St. Jude” by David F. Gray
“Flesh-Bound Shadow Sun” by M. S. Swift
“Doorstepping” by Kelda Crich
“Saturday Night at the Esoteric Order of Dagon” by Jill Hand
“City of our Lady, Queen of the Angels,
Virgin Mother of a Thousand Young” by Kevin Wetmore
“Warm Red Sea” by Jaap Boekestein

I also edited the anthology.  The Kings in Rebel Yellow is one of my favorite stories that I have written.  I will definitely be continuing on with those characters.  I can't wait to find out what kind of chaos and madness they get involved in.


You can find the First United Church of Cthulhu at FUCC.IT


Available in paperback or eBook:
URBAN TEMPLES OF CTHULHU

Posted by Khurt Khave at 9:13 AM No comments: