The Headless Girl with the Tentacle Tattoo - she has a name 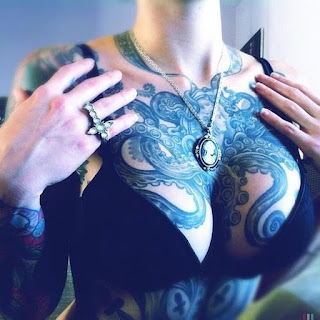 The Headless Girl with the Tentacle Tattoo – she has a name. And a head. And a full body. But you would never know it from all the social media reposts of the above picture. The same one has been recirculated through various blogs, websites, and group pages of numerous steampunk and Lovecraftian connoisseurs for years. She Who Cannot Be Named because none of these idiots could be bothered to take 2 seconds to do a Google search. 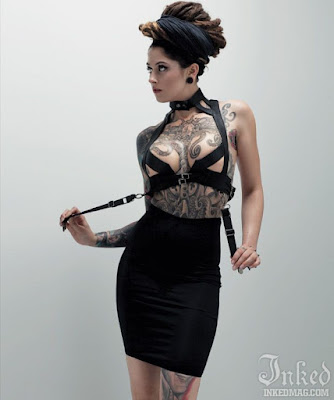 But I digress. Her name is FreyjaVeda. According to her tumblr she is the “owner of the Golden Axe Tattoo in London, Ontario. Amazonian Pin-Up model, snowboarder, metal head, traveler, Primal life. . .a cross between Uma Thurman, 50's Liz Taylor, and Weird Al.”

Excerpted from inkedmag.com:
But her signature tattoo is a kraken, whose beak circles her belly button and whose tentacles wrap up her chest and circle her breasts. “It's my gorgeous Mike Austin torso piece!” she says. “I wanted something huge and gnarly that flowed with my curves, and what better than tentacles? I'm super stoked on it. People actually recognize me by it now. It is a weird experience to have people run up to me at a convention with my boobs as their iPhone wallpaper and hold it up to me and shout, “It's her!”

And she comes out to Arizona for the Hell City tattoo fest, so as the head priest of the First United Church of Cthulhu located in said state, I think I should grant her some type of krakenous goddess status.  Or at least buy her a drink.  It's the least I can do for advancing the tentacle agenda.

The following video contains full nudity. You get to see everything, tattoos and all, up close and personal.

tsurufoto presents... But I Don't Want Anybody Else starring Freyja Veda from tsurufoto. on Vimeo.


P.S. She also has the crazy animated deer head from Evil Dead 2 tattooed on her. . .somewhere. Go find it!