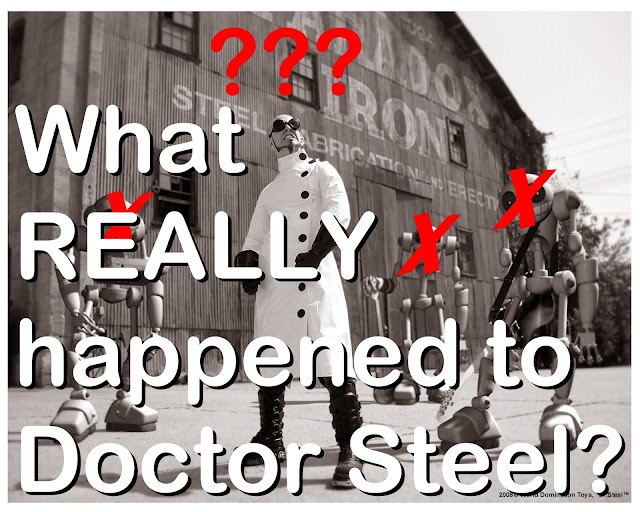 Doctor Steel's retirement has always been shrouded with questions and concerns. Was it really some legal debacle that broke him? Was it all the Doctor Horrible hullabaloo? Did Universal Pictures and the Will Ferrell Land of the Lost film come after him for the illegal use of sampling in Doctor Steel's “Land of the Lost” song? Was the pressure of being a mad scientist, world conqueror, and rising music star too much for him? Was it the Alien Illuminati? As it turns out, it was none of these.  And the reality goes far beyond his cryptic retirement letter.

After announcing his retirement in 2011, he wrote an explanation letter to Commander Jet of the Toy Soldiers (his group of loyal followers – calling it a fan club just doesn't do justice to the wonderful community that was created around the persona of Doctor Steel). She chose to publish the letter so that all the toy soldiers could read it. Here is a transcript of the letter:

Dear Jet,
2012 is here. The end of the world? We just don't know yet. Flashes in the sky. Holograms? The answers aren't showing themselves. In any case the end of my world has manifested. I have been gone and I shall continue to be gone. Rest assured that it was no easy decision. But under the circumstances it was the only decision. Blacklisted, betrayed. Strong words? Too dramatic? “Life is a stage” and I the act which has been canceled. With nothing but the kindred spirits of the Toy Soldiers. The shared vision of creativity and fun. You were the only delight in recent times. Still, my experiences have woven a tapestry of complications which have forced me to disappear. I cannot offer a complete explanation for a variety of reasons but I felt obligated to send you a note in an attempt to convey my appreciation. You have had faith. You have made a difference. You have seen the importance. While my experience has left me drained of my finances and my privacy. Robbed of my creativity, passion, and so many years of my life. I only hope that a spark remains in you all. An idea is immortal.

The business at hand. The wasted energy for the invented rules of the system demands one final task of me. Having recently endured the experience, the ritual of closing down my company, I have removed all aspects of the associated business. Websites, products, and otherwise. My “advisers” indicated that even Toy Soldiers Unite be destroyed. I cannot allow this to happen. I am now powerless but I am, fortunately, not in possession of Toy Soldiers Unite!

I am certain that many of you have a variety of opinions regarding my slip into silence. I can ask nothing from you but mutual respect. I wish great happiness for the Toy Soldiers. I always have. There was so much I wanted to give you. So many ideas which were unable to manifest into reality. It has destroyed a very cherished part of me. This chapter is over. This chapter is closed. The universe has swallowed up those opportunities and I am no longer compatible on this frequency. I search now only for peace and quiet.

If things had been different, I would have given you the gift of your very own robot. It could have been a reality. I do believe that. I am not mad. Only perhaps a creative who has been immersed in the bureaucracy of his own demise for too long. I must rest now. I thank you for your understanding.

May all of your ideas find wings. 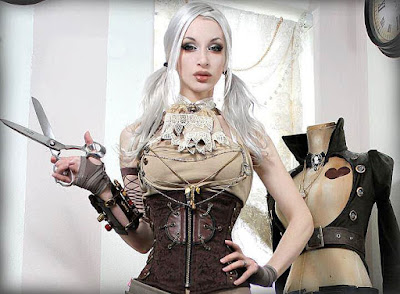 Some of you are probably familiar with Kato, the popular steampunk fashion designer and cosplayer, often referred to as “the supermodel of steampunk.” She was the originator of the Toy Soldiers and had been in a relationship with Doctor Steel. The relationship did not go well.

Back in October 2016, Kato, real name Kate Lambert, discovered the Toy Soldiers Unite group on Facebook. Here is her initial post in the group:

Look at that, 10 years. I was just a 22 year old kid, obsessed with this musician who was aiming to do so much more than just music. I agreed with his message and felt empowered to do something out of pure passion, “just for fun.” I had never been part of a “fan club” let alone created one before but from a few scribbles in my note book, to launching a bad ass website a few months later, it turned into a refined monster of 36,000 registered members and took up every second of my day; enlisting, posting, monitoring, mailing out Soldier packs, filming webisodes, answering questions, banning douchebags, putting out fire after fire, laughing, crying, and feeling loved and appreciated.

I haven't posted in this group before because I wasn't really on Facebook around the time he was throwing the towel in and we were having some of the biggest blowouts over his decision that our relationship had ever seen. A huge part of my soul, along with hundreds of other Toy Soldiers', was crushed that day and I never got it back. The deep, cold sadness that I felt every time I saw some TSU symbolism or was asked for the millionth time “aren't you married to Dr. Steel?” was painful and deflating mixed with utter loneliness from him forbidding me to ever talk about it or process any of the emotions of having dedicated 6 years of my life and thousands of dollars to someone else's dream for not even a “thank you.”

. . .then today, I stumbled across this group. I scrolled and scrolled and looked at the amount of support and dedication that still remains after all this time and for the first time in ten years, I got a little piece of my soul back as I realized that it wasn't all for nothing and, even if there were just 5 people left who had come together because of this and are making each other laugh and meeting up for drinks, then that stands for at least something.

I am beyond proud of those who've kept heart and positive energy against the odds and without a focal figure. I'm especially proud of Dutch and JET. You guys are owed, all of you. I tried to even bribe him back at the beginning of last year but I was up against complete disinterest and selfishness. His intentions weren't good or true and his real feelings toward those who loved and supported him were pretty insulting. If I can give something more to you guys, I will. You're good people.

I am sorry if anyone feels like I abandoned them. He forbid me from dedicating any more of my time to the army that I fucking created, as well as forbidding me from having a social circle and ultimately a life. All that mattered to him was that I continued to work my ass off for him on projects that didn't require him having to lift a finger while he sat back and abused my bank account and our relationship. The illusion was great, but in reality, I wouldn't wish to have a person like that back at the helm.

I am open to answering questions that some of you may have, especially those of you who unfortunately fell fool to rumors that trolls have fabricated about me. It's easy to believe shit we read on the internet about people we've never met, so I forgive those of you who did and want you to know that I don't judge you for it.

A very interesting look at the man behind the curtain, but that didn't answer the question, “What REALLY happened to Doctor Steel?” And she specifically wrote that she was “open to answering questions.”


Of course, some of the more namby-pamby group members were all, “No. Let her be.”


Fuck that. She offered, so I asked, “What's the real reason he bailed out? The speculation is insane.”


There are a ton of petty reasons but the baseline is this: He didn't enjoy performing live, ever, and he wasn't making a financial return from what he'd put into it at that point. EVERYONE fucking knows that the music industry takes some serious SERIOUS bloody legwork to get there and start profiting but he's an over-entitled brat with zero patience and didn't want to put in any more time or effort despite being right on the cusp and having a lady financially taking care of him.

So there you have it, from the person who was closest to him.

One monkey-avatared toy soldier summed it up best, “We moved from following an idol to following an ideal. Something that allowed us to focus more on each other and help each other improve on so much more. And I may have joined after the split, but I think enough would agree with me that the split might have been the best thing for the TSU even if it meant losing a lot of members.”


The following is a copy of Doctor Steel's original retirement letter and screen caps of Kato's initial post on the Toy Soldiers Unite group page as well as her answer to my question. 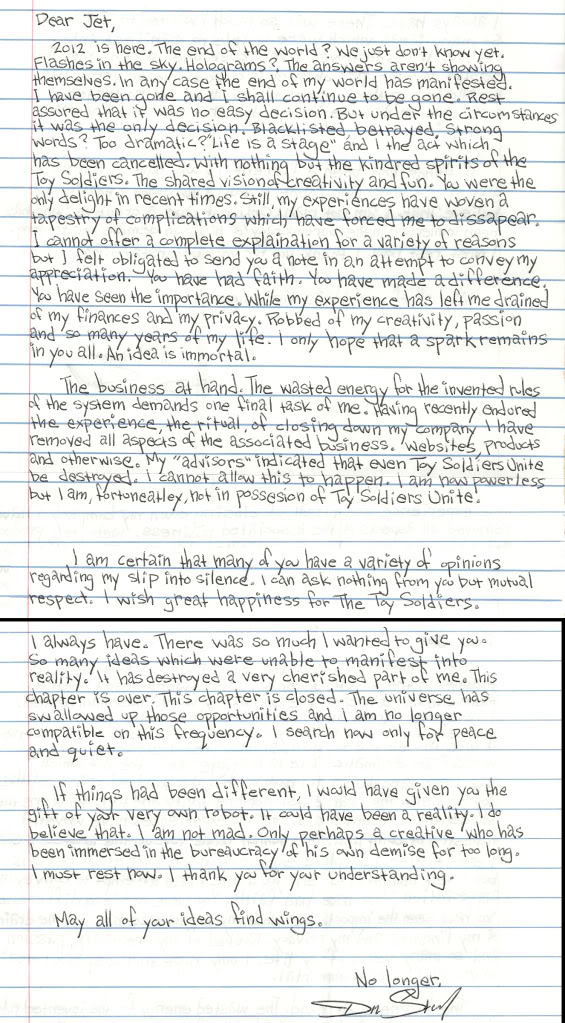 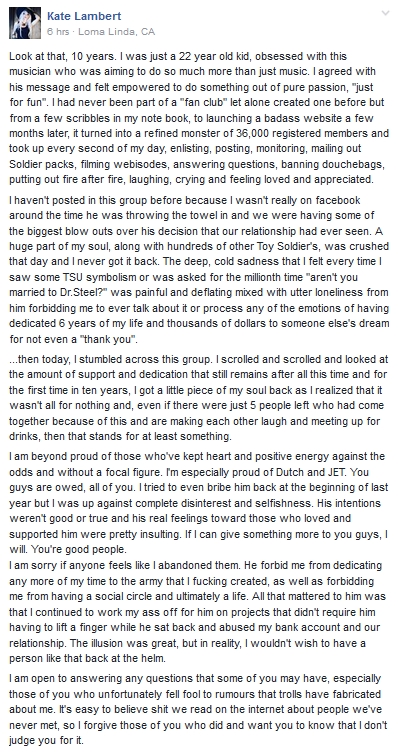 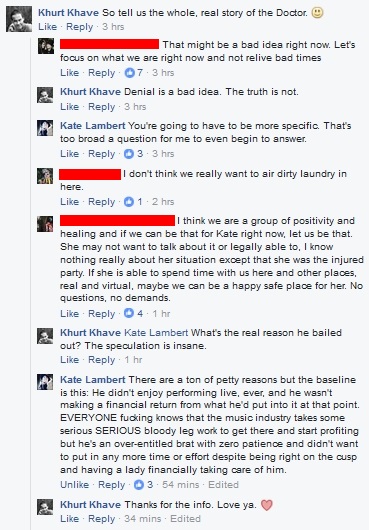 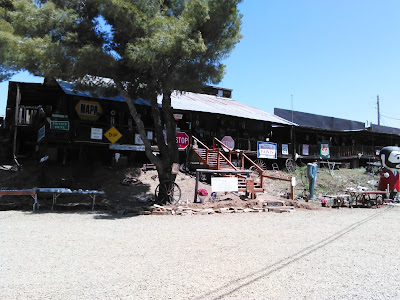 Steampunk heaven.  No other way to describe it.

Smitty's Antique Museum in Mayer, Arizona (formerly known as Smitty's Big Barn of Antiques and Collectibles) looks like any other roadside knick-knack stop along the highways of America - from the outside.  But once you step inside, it has the largest selection of some of the rarest, and highest quality, antiques I have ever seen.  It is by far the best place in Arizona.  I have never seen a collection of items so vast in my life.  They put all the spoiled Richie Rich spots like Scottsdale and Paradise Valley to shame. 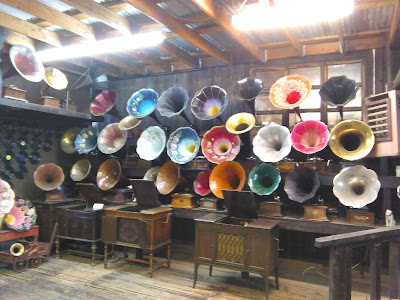 When I stepped inside the phonograph room I fell in love.  And this picture is just of one half of the room.  I couldn't fit the other wall or the ones beside me into the picture.  And the host of upright record players in the front room.  And the next room full of vintage radios that have to be around 100 years old.  And all the Victorian furniture.  I should have taken more pictures.  Especially of the big collection of vintage hand-cranked wall phones and the giant, ancient, industrial switching board.


"Smitty's store, perched on the Big Bug Creek in Mayer, features 13 rooms, 30,000 sq. ft., filled with 10,000 items encompassing everything one can imagine - figurines from Hummel to Precious Moments, autographed cereal boxes, clocks tiny to grandfather, slot machines, lamps and neon bar lights, furniture, including an interesting set made of cow skin and horns, pedal cars, model cars and Matchbox cars, Coca Cola memorabilia, pinball machines, music makers of every kind, fine china and glassware, silverware, and, well, you get the picture. There is not enough time in a day for a person to see everything - the place is an antique overload." --Daily Courier, Prescott AZ 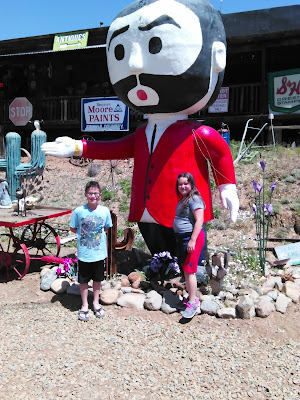 It can be hard to see the exit from the highway, as Smitty's literally sits lower than the Big Bug Creek overpass.  But they have some tables and chairs set up below the overpass next to creek (one with real, running water - something you don't always find in Arizona) which made for a nice rest stop and the kids loved looking for "cool rocks" and playing in the creek. 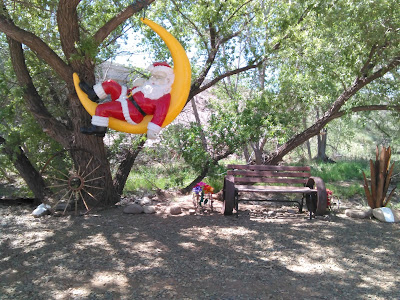 It's a hidden steampunk paradise that is only about an hour and ten minutes north of Phoenix.  Even if you can't afford to buy anything it's well worth the day trip to pay them a visit a see all the incredible antiques they have.  It is truly like stepping back into a bygone era.