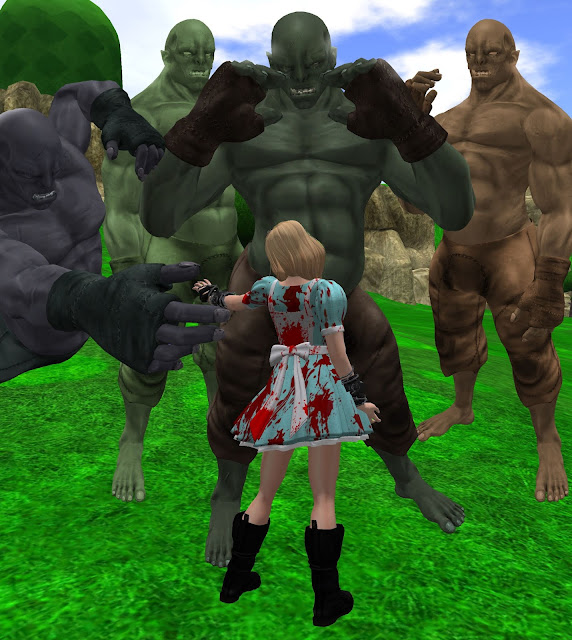 Alice woke me up at 4am out of a dead sleep, saying that she wanted to tell me what had just happened. For a chrononaut she had terrible timing.

After many adventures across many worlds, Alice had retreated to the wondrous rolling hills of Ooverdare. Not retired, mind you. For a chrononaut, the expression, "a time and place for everything" was very, very literal. Right now, at this time, at this place, was her everything. No past, no future, only right now. Retreat, repast, recover. Unwind, don't rewind. She could change her past if she wanted to, but you cannot. Besides, why would she want to? If she did, then she would not be the she that she is today. Good, bad, or sideways, she liked herself just the way she was.

Now, the sad little man had taken to calling himself Fateweaver. And everyone told him it was a very good name. A powerful name. A meaningful name. A presentient name. But it wasn't, not for him at least.

Fateweaver hated time, thus he hated Alice. He believed, incorrectly, that since she was a chrononaut, that she had all the time in the world. He wanted to take all her time since he had wasted all his time. Then he would have all the time for all the hate that he loved to share with everyone.

But how to steal time from a chrononaut? "Eureka! I will gather an army of time trolls from the depths of all the darkest worlds, and they will have the power to take all her time!" he declared to himself. And so he did. Big time, small time, even trolls who really had no time at all; they all made time, to hate with Fateweaver. They marched under his false flag that flew low and flapped frantically as they crossed the spidery-legged terrain, up and down, over and around, a million creepycrawlies, predators of the dateshifter.

They hurled rocks, and axes, and barbed comments at her cozy cottage. "Why must they always attack at tea time?" Alice wondered. She slipped on her boots and walked outside.

With a wave of her hand, time stood still. But with this many trolls, it would not last long. Time was a slippery thing, and it marches on, whether or not she or anyone else wants it to.

"The price of peace is peace." Alice went to find out who was in charge of this blunderous undertaking.

She found Fateweaver. The little man in the big hat. His pride was not hidden but displayed. She unfroze him. "Tag. You're it. Now what is your game?"

"I hate games," he replied. "And I hate time, and you are having the time of your life, so I hate you. I will take all your time."

"Did you honestly believe that time trolls could harm me? I knew they were coming before they did. I used their own time against them. And it takes me no time at all. You see, I simply ignore them, and they are not there. I have no time for them and they burn up all their time." The trolls all vanished. Gone without a trace.

"What?!" exclaimed Fateweaver in confusion. "Where have all the time trolls gone?"

"You cannot waste my time, but you are testing my patience." She spun him around and he fell to the ground.

"I have come undone." He sat bedraggled, moping.

"My time is my own. No one can take it from me. But I share it with who I choose. Good day to you."

"I need to get some more-comfortable shoes," she thought to herself. What was that phrase again? "With enemies like these, who needs cupcakes?" This girl, that's who.

Posted by Khurt Khave at 1:46 PM No comments: