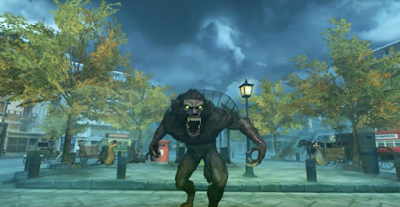 "Turn of the century, London England. A poisonous gas has been unleashed into the air and is quickly turning everybody into ferocious werewolves. The city is being decimated as the creatures gain in numbers. Bodies are ravaged in the streets while carriages crash and burn. Can you survive this adrenaline-charged ride as you fight off the beasts that hunt us down and try to purge the city of their creator."

I've also done the zombies and the Pseudozilla, and Werewolves is the best so far.  I got outvoted for going Mad Max and doing Road Fighters.

The steampunk elements don't kick in until the end of the game, and ARE SHOWN in the trailer.  So don't watch if you don't want the spoilers.

Here is the Werewolves trailer:

This is what the typical theater-style setup looks like. 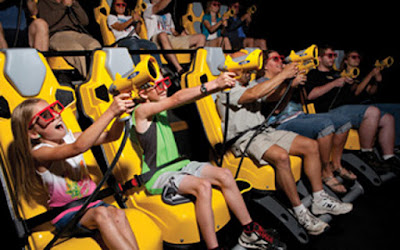 I highly recommend the experience.