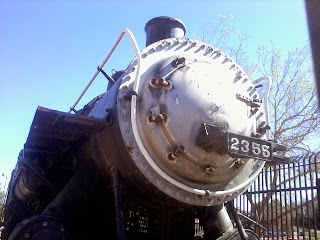 In my pursuit of finding interesting places of steampunk interest and historical significance in Arizona (which are quickly dwindling as the city of Phoenix especially likes to yell “eminent domain!” and sling their wrecking balls around willy-nilly, knocking down buildings left and right regardless of the historical value of the property, so that they can put in another parking lot and charge $20 a spot on game nights. Which is still better than Tempe, they just knock 'em down and leave the space as dirt lots with no plan beyond trying to schmooze out-of-state investors to Buy! Buy! Buy! more real estate) I kept hearing about “that one train” in Mesa.

It is actually steam locomotive #2355, built October, 1912, for the Southern Pacific Railroad. It is a Class T-31, ten-wheeler, 4-6-0, built as a dual service locomotive for smaller passenger and freight trains. The #2355 was retired in 1957 after 45 years of service. Originally headed for the scrapyard, it was instead given to the City of Mesa to exhibit. 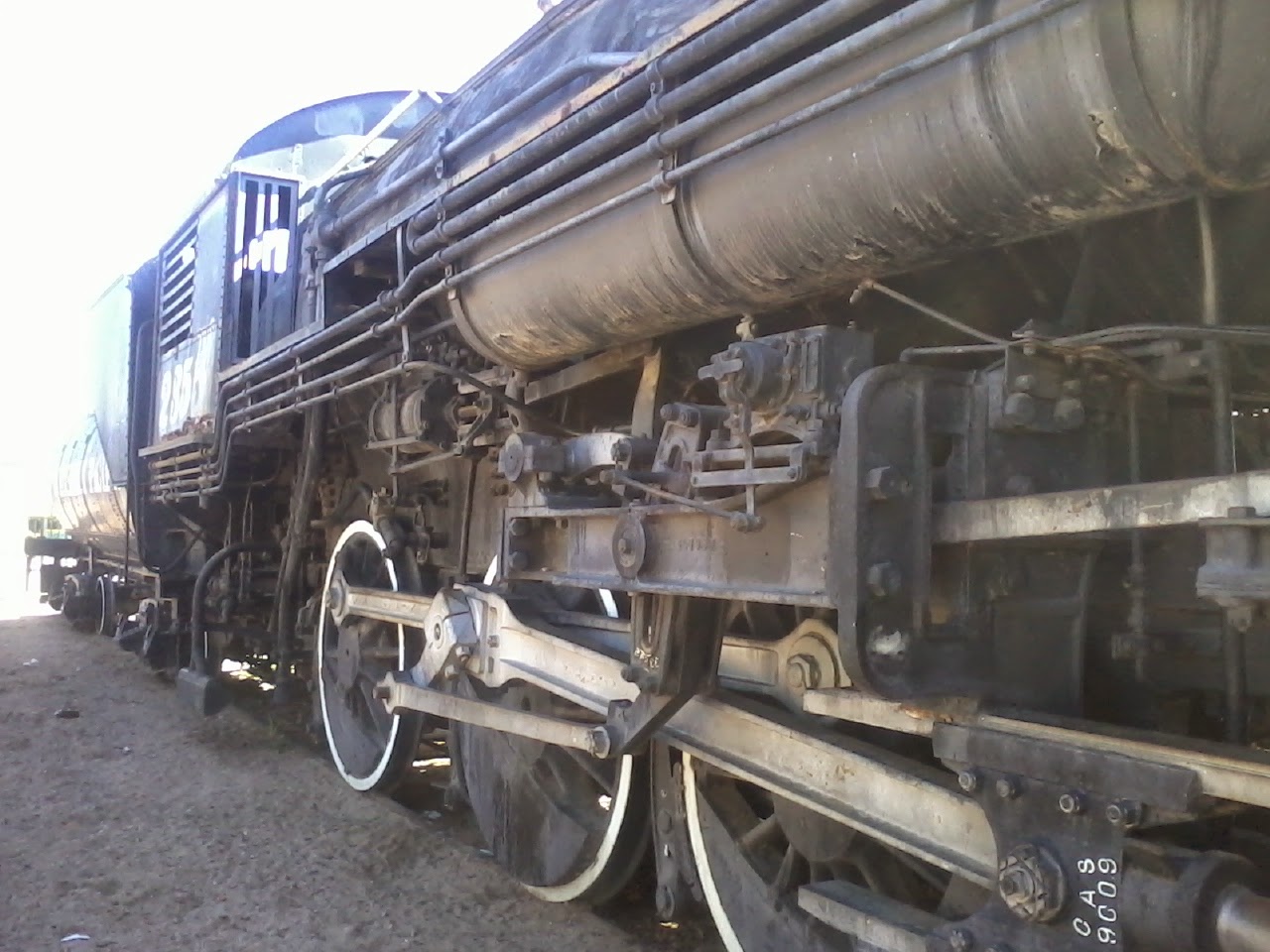 Isn't this supposed to be about cats? Where are the cats?

Yeah, yeah. I'm getting there.

Locomotive #2355 was placed in Pioneer Park, located at 526 E. Main Street in Mesa, Arizona. The train engine was fenced in, in 1993, probably due to squatters and vandalism since it sits very far back in the park away from the busy Main Street and the immediate neighborhoods were in decline, even though it is right across the street from the überkirche of the Mesa Arizona Temple of The Church of Jesus Christ of Latter-Day Saints (read: Mormons, if you didn't know what all that meant), itself established in 1927.

Apparently #2355 is succumbing to the elements. The Save Our Train Committee (saveourtrain.com) was formed from a group of Mesa residents and city employees who grew up with the locomotive and are dedicated to restoring the steam engine and relocating it to the front of the park on Main Street (where hopefully it could live out its days unfenced, as free range locomotives are the best kind, and then would open it up for a ton of steampunk photoshoots).

But the cost of restoration and relocation has been professionally estimated at between $100,000 - $125,000. Which brings us to the point and title of our story. That move is probably never going to happen, but on the upside, the engine has become a sanctuary for the homeless cats of the neighborhood, where they can seek shelter behind the safety of the fence and beneath the belly of the locomotive. A large plastic tray filled with cat food has been set inside the fence, and out of reach from human harassers. It is weighed down by a large rock to keep it from tipping or blowing over, so this is not the anonymous caretaker's first cat rodeo. And there is a child's bucket filled with fresh water for them to drink.

There were about a dozen of the choo-choo mew-mews milling about during my visit.  At least someone is taking care of the itinerant steam cats. 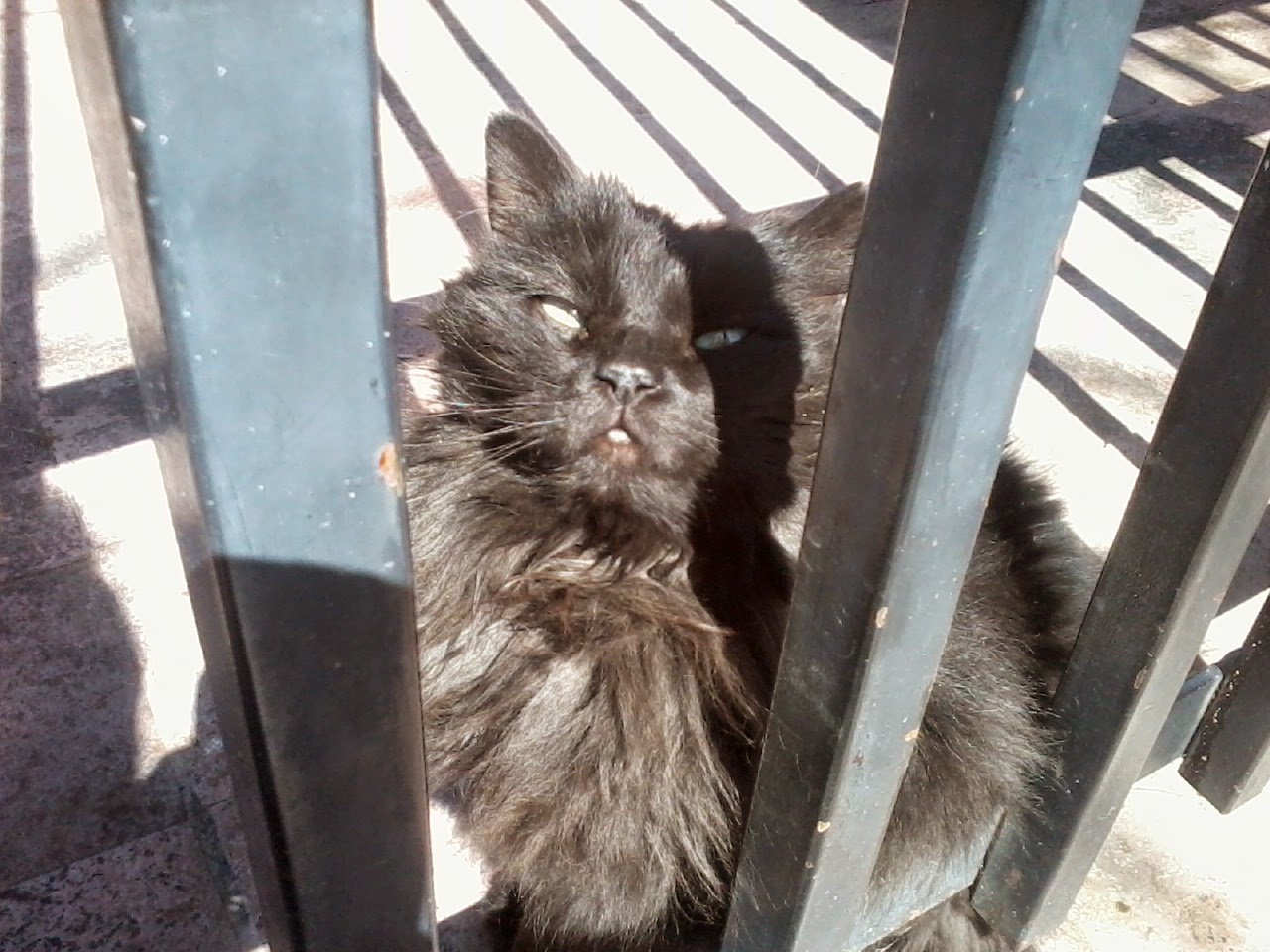 This was the friendly greeter for the group of train cats.
I'mma call it Smokestack, because trains. 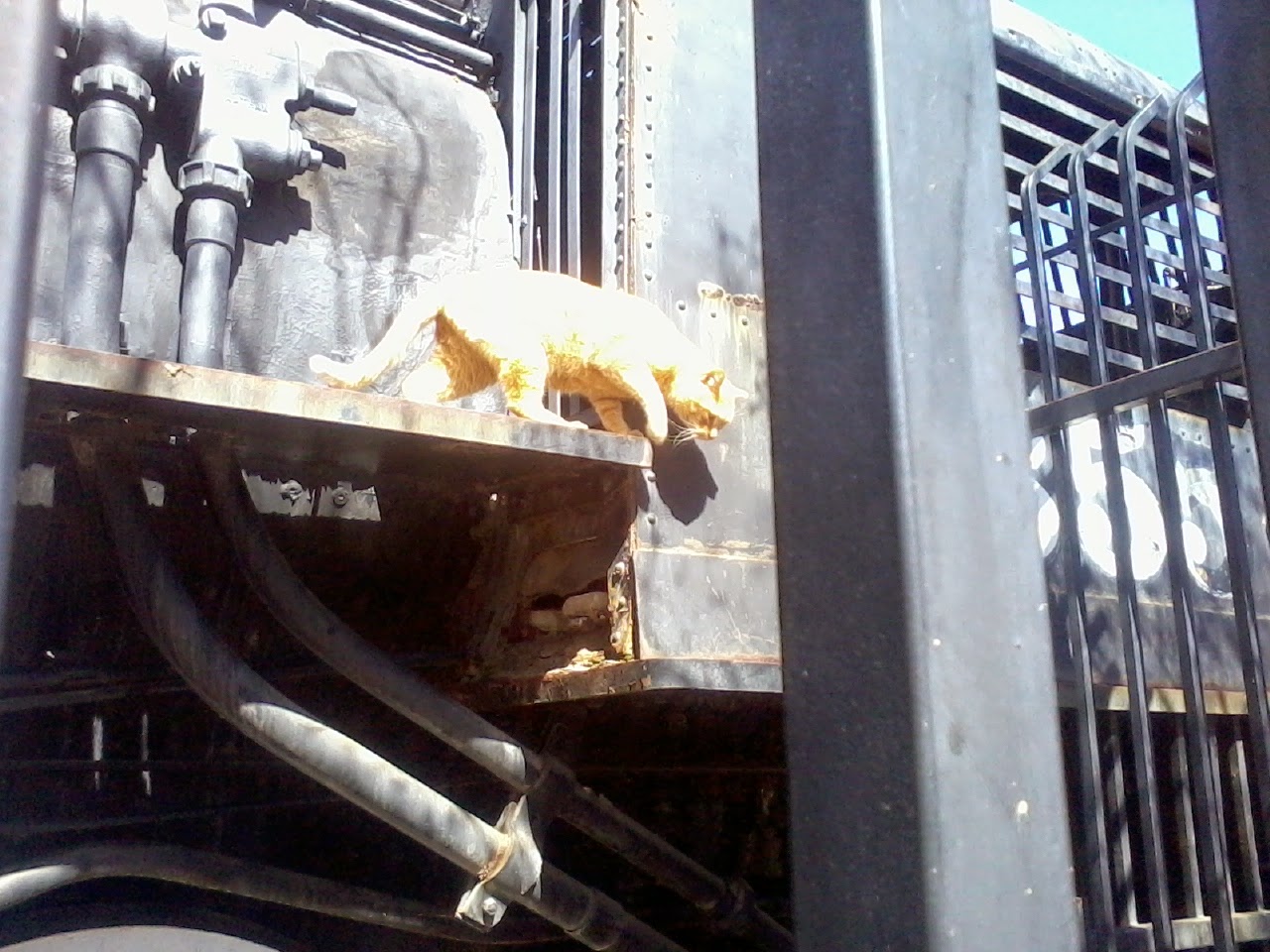 This cat was napping up on the locomotive.  My taking pictures interrupted. 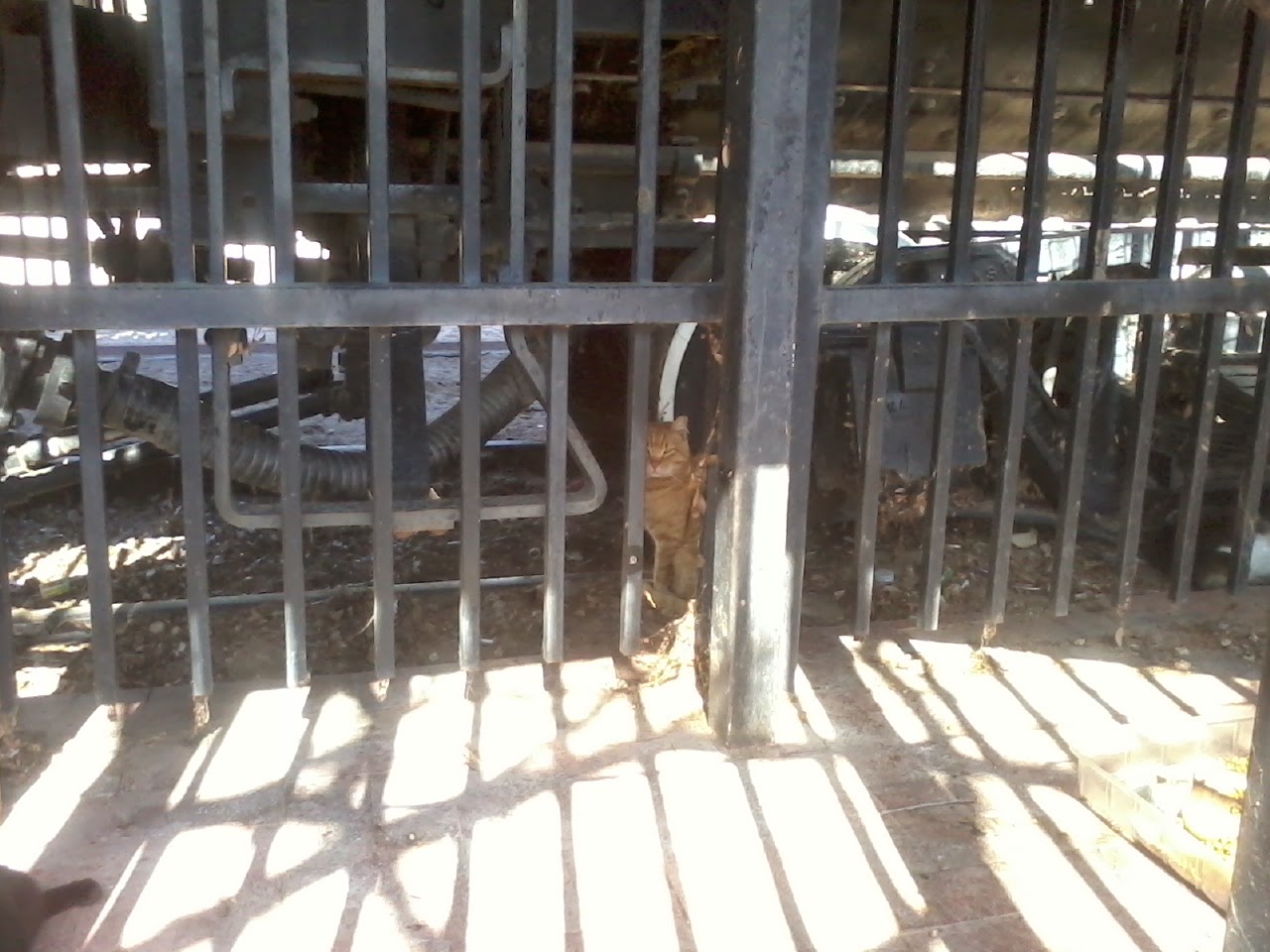 A different orange cat beneath the train engine. 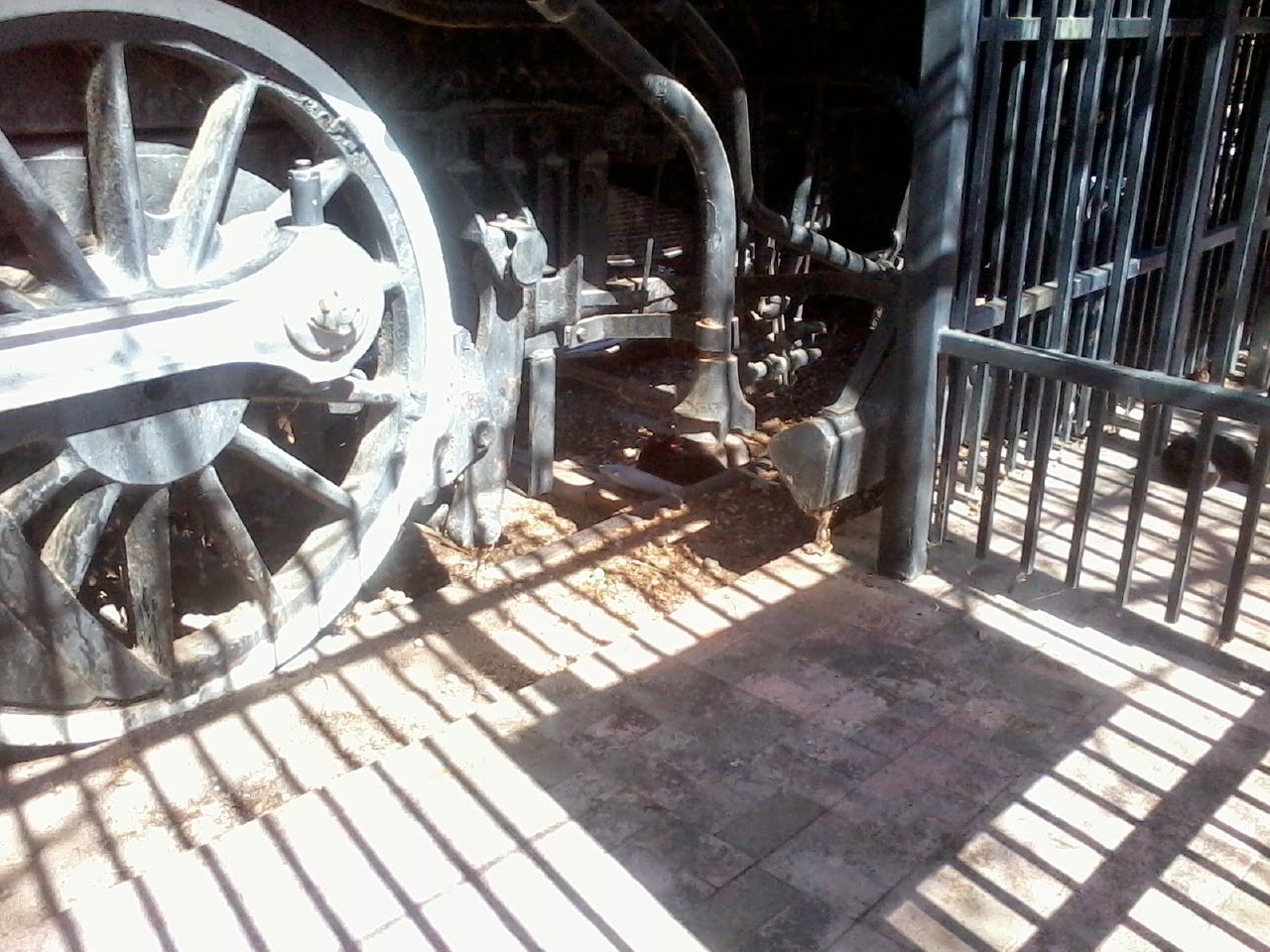 A black cat curled up safely behind the fence. 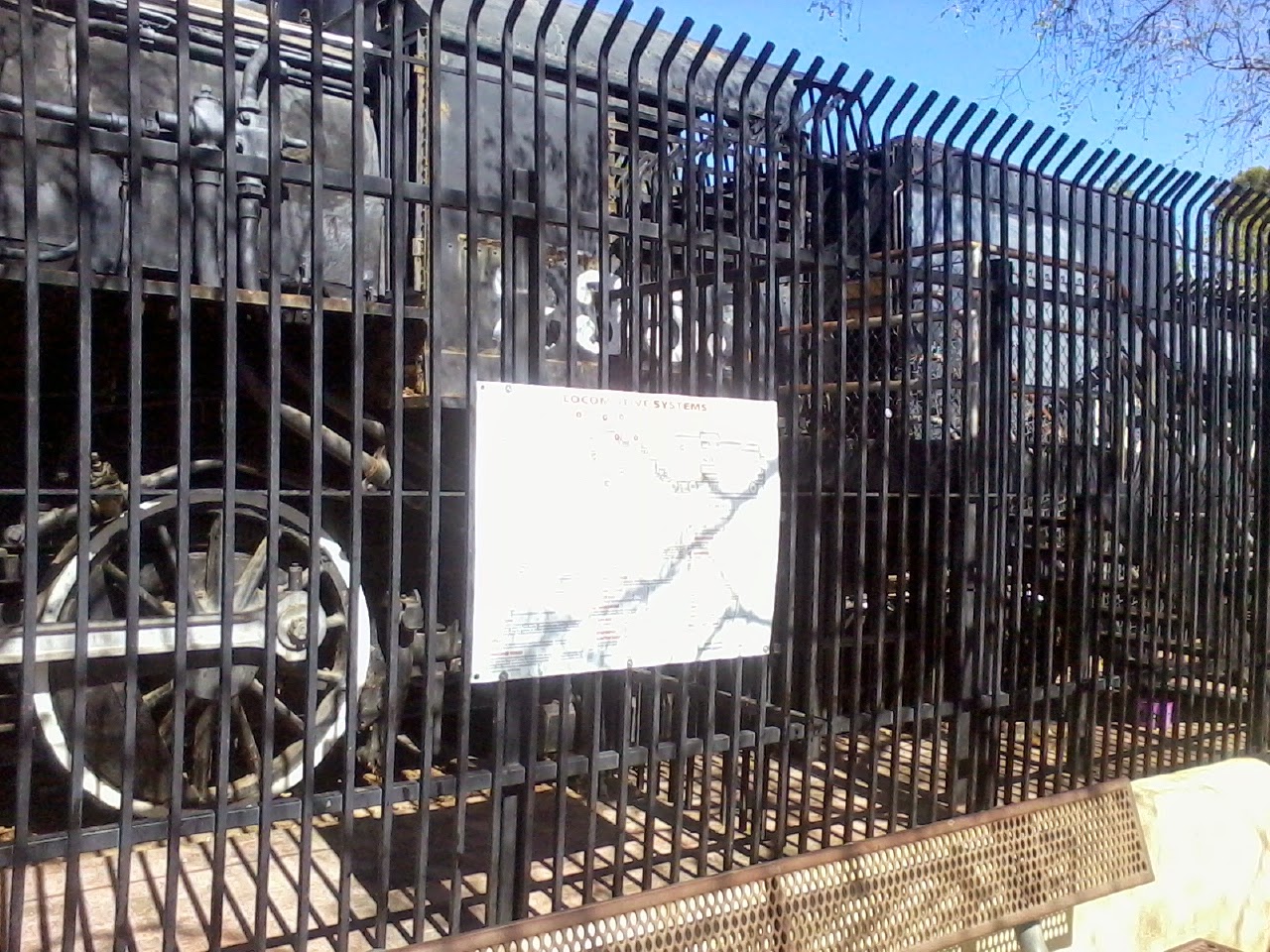 My phone didn't capture it very well, but there is a fantastic diagram
of all the parts of a steam locomotive.
You can see their purple water bucket under the stairs
where people used to be able to walk up and experience train firsthand.
Posted by Khurt Khave at 7:12 PM