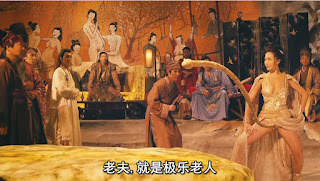 I love tentacles! I love art! I love information! That's why it sucks when so many cool pictures, memes, and video clips get passed around with no tags at all as to their source. I kept seeing this picture or an animated gif of it reposted time and again but I kept forgetting the name of the film it was from. For some reason the animated gif is in black and white, and it is a period piece with era specific clothing and sets, so a lot of people think it is a much older film.

It has been called “Crouching Tiger meets The Joy of Sex.”

Here is the trailer:

Here is the full film: